Marketing techniques to help you jump on the bandwagon

Aligning with trends can make you look hip, or easily trip you up.

A typical marketing tactic is to align your brand with a particular lifestyle choice. Advertising has the power to make you think you can be someone different or better, so long as you purchase the product.

In recent times there has been political and social conversations born on the internet, that have helped created and give voice to major movements such as #metoo and BlackLivesMatter. These have proven too tempting for brands to ignore, for their publicity and money making potential. Get it wrong though, and the backlash can be painful, especially in the age of Twitter.

So take heed of these examples and learn how, with a little savvy marketing, your organisation can jump on the bandwagon without falling immediately off it!

In case you missed it (where were you?) Greggs the baker recently launched a Vegan Sausage Roll. The move was following strong consumer demand, including a petition by PETA that was signed by more than 20,000 people.

Selling 1.5million of their signature meat-based sausage rolls per week, the introduction of a vegan option was a no-brainer, enabling the UK’s 3.5million vegans to enjoy their bestseller, along with a growing number of self-proclaimed flexitarians, week-day-vegetarians and meat-reducers.

Launched aptly in Veganuary this year, the reaction was surprising. Twitter had a total meltdown, with parties on both sides hurling profanities. 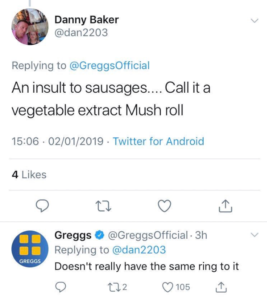 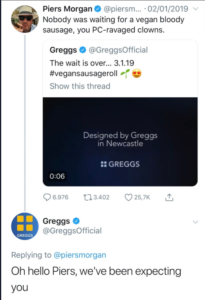 Greggs knew this was coming, because unfortunately, anger on social media isn’t just confined to delayed trains anymore. And there is a special, very loud portion of people resistant to anything that offends their non-vegan life choices.

The campaign was expertly managed by well a versed social media team who engaged with comments in a humorous tone. Greggs’ online retorts were funny and measured, acting to boost the launch of the product. #Vegansausageroll trended all day and the company declared the pastry as the best selling new product in six years, selling out in a matter of hours.

There was a lot of noise recently around the new Gillette campaign that saw a change to it’s hyper macho image. Their film (launched only online) encouraged men to ‘be the best they can be’ and push back against bullying, sexual harassment and toxic masculinity. It was a brave move and as predicted, received a lot of attention, with highly offended customers claiming to boycott Proctor and Gamble, the manufacturers. 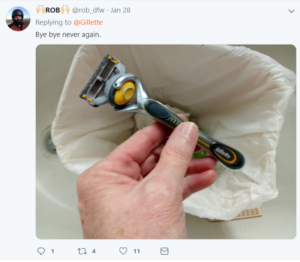 However, it made sense for the brand to own this cause, as it was a smart way to dissociate Gillette from their older advertising.

The production of the film and its associated website wouldn’t have come cheap, and the company claim to be happy with post-campaign sales. And whether you loved it or hated it, with 27.5m youtube views in just 2 weeks, we would say Gillette played this risky move well.

Long has been the notion that shoppers want their food to look immaculate. A bright yellow banana with a gentle arch or a perfectly tapered carrot perhaps.

Farmers however, are under a huge strain to maintain these standards, resulting in the UK producing enough fruit and vegetable waste to feed the population of Birmingham for a year, every year.

To counter this, the supermarket Morrisons decided to test whether their customers would purchase a new line, branded ‘Wonky’. The uglier items tasted the same but were priced lower than their attractive counterparts.

It was a bold move, but the public have completely embraced all things wonky. The supermarket now sells over 500 tonnes of misshapen fruit and veg a week and are regularly adding to the range, which now includes wonky kiwifruit and avocados. Morrisons is currently the fastest growing UK supermarket with total sales increasing by 1.9%, which it has directly attributed to it’s wonky greengrocery.

If you believe in something, say it

In August 2016, Colin Kaepernick, former NFL quarterback, caused a stir when he sat on the bench while the pregame US National Anthem played. Asked why he wasn’t standing, he claimed to be sitting in protest over police killings of unarmed black men. He went on to kneel during the anthem before all of his games, as did a few other players even after Kaepernick was no longer signed.

The practice of kneeling during the anthem proved controversial, with Trump getting in on the action, characterising it as disrespectful to the US flag and military.

Nike saw this opportunity and used Kaepernick in an ad campaign alongside the words, “Believe in something, even if it means sacrificing everything”.

The brand knew the shock advertisement would cause a stir. And soon enough, videos began to emerge of people burning Nike shoes, cutting the swoosh logo off their socks, and even vowing to never buy Nike products again.

Although this must have been alarming for the brand to see, they had faith in their message. And it paid off. In the days following the Kaepernick campaign, Nike sales soared 31%.

Make sure you check your cupboard for skeletons first

There’s a fine line between a brand that uses its voice for good and one that tries too hard to capitalise on a political movement or trend. The internet can spot inauthenticity a mile off and will not suffer fools lightly.

For instance, In 2018 Brewdog ‘ironically’ made a pink beer for girls in order to highlight the gender pay gap. The brewer was criticised heavily, not just for the obvious stereotyping, but because it didn’t take much research to expose their 2.8% pay discrepancy between the genders. Awkward.

In 2017, Pepsi famously made a boo boo when it’s ad suggested that racism could be solved by one of their fizzy drinks. The video was universally panned and quickly pulled, resulting in Pepsi having to its lowest consumer perception levels in nearly 10 years. Eeeek.

We want all businesses to take the leap and successfully move with the times. With good planning and the right strategy in place, the rewards can be great. If you need a helping hand to plan your campaign, we can be just that – get in touch.

Good Beans is an ethical marketing and communications agency working with social enterprises, charities and organisations that want to be better. Want to reach more people? Contact us.